Scientists in Kenya have discovered a massive underground reserve that could allow the drought-ravaged country to meet its water needs for the next 70 years. Discovered in the desert of Kenya’s Turkana region, the Lotikipi Basin Aquifer contains more than 200 billion cubic meters of fresh water, and is about the size of Rhode Island. All told, the region has at least 250 billion cubic meters of fresh water stored in underground reserves, which are replenished at a rate of 3.4 billion cubic meters per year. The discovery, first reported by ITV News, will be officially announced Wednesday by the Kenyan government and UNESCO, which helped realize the project with funding from the Japanese government.

The project was spearheaded by Alain Gachet, president and CEO of Radar Technologies International (RTI), a France-based natural resources exploration firm. Over the course of six months, Gachet and his team of researchers used RTI’s WATEX mapping system to survey the northern county of Turkana, one of Kenya’s driest and poorest regions.

WATEX combines satellite and radar imagery with geographical surveys, climate maps, and seismic data to provide a comprehensive snapshot of what may lie beneath a given area of land. The technology was originally used to identify mineral reserves, but has since been used to find underground water resources — most recently in Angola, Afghanistan, and the Darfur region of Sudan, where it was used to provide water to refugees during the humanitarian crisis there.

In a phone interview with The Verge, Gachet explained that WATEX is not capable of actually “seeing” what lies beneath the ground, noting that it can only offer probabilities of finding water in a given area. In the case of shallow reserves (up to 80 meters below ground), it can identify water sources with between 95 and 98 percent accuracy.

RTI’s survey identified five underground pools in Turkana, but Lotikipi is by far the biggest. Located 330 meters (1,082 feet) beneath the desert surface, the aquifer is naturally replenished by rainfall at an estimated rate of 1.2 billion cubic meters per year.

Kenya has faced devastating droughts in recent years, and the impoverished nomads of Turkana have been hit especially hard. A 2011 drought across East Africa triggered a severe food crisis that affected an estimated 9.5 million people in the region, leaving many dead or malnourished. In some parts of Turkana, malnourishment rates are estimated at 37 percent. According to Gachet, the region’s inhabitants typically walk up to 10 miles to find the nearest source of water, but Lotikipi could drastically change that.

“They were dancing around, it was very, very emotional,” Gachet says, recounting the moment his team’s drills discovered water above Lotikipi. “They were so happy to see water springing from the ground.” 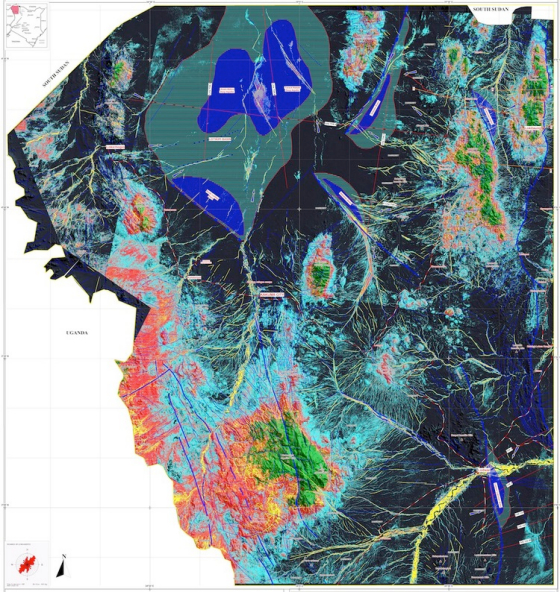 A survey image of Turkana from RTI’s WATEX system.

The discovery presents immediate benefits to the health of humans and livestock, and could have even more dramatic effects on Turkana’s economy. Gachet and others say the abundance of water could spawn an entirely new agriculture industry, potentially providing a more stable source of food and income to inhabitants accustomed to more nomadic ways of life.

“This is literally a jump from the neolithic to the modern age,” Gachet says. “They want to be able to fertilize and grow their own food — to stop the survival economy and move to something more sustainable.”

But Gachet acknowledges that this transition will likely take time, and should be treated with care. The people of Turkana need to be trained and educated on agricultural techniques, and more wells must be constructed around Lotikipi in order to avoid over-farming nearby land. There’s also a risk that foreign investors may swoop in to reap the benefits, perhaps at the expense of Turkana’s inhabitants. China has invested heavily in Africa over recent years, particularly in natural resources.

“We are facing something completely new and we have to be careful,” Gachet continues. “I don’t want to see this land in the hands of [foreign] companies.”

UNESCO is aware of the challenges that lie ahead, though it seems confident that this week’s discovery could bode well for a region that has been crippled by drought. The Kenyan government has already announced plans to launch similar explorations in other parts of the country, pinning its hopes on Gachet and his mapping technology.

“I’m not saying this could solve all of the problems, because from finding water to providing water to the population is another step … we need to have investment, we need to put in place infrastructure and so on,” Abou Amani, a scientist at UNESCO, told ITV. “But we have seen the system and the fact that water is there, and that is extremely important … it could be a game changer within the country.”

Mention Zayn Jawaad Malik and fan girls who call themselves[...]

Alhamdulillah, we were blessed with the presence of Habib Umar[...]