Recently there has been a lot of online buzz on the Israeli-Palestinian conflict that has existed since 1948 to the present day. Facebook, twitter, Instagram, you name it- all have this proliferation of images and videos on the conflict; consisting of soldiers and innocent civilians from both Israel and Palestine.

One thing’s for sure and that is the fact that these images and videos reach massive audiences spreading all over the world: the evidence of the power of new media could not have been more apparent. What is astonishing today though is the fact that the propagation only started recently even though the conflict has existed for so long. Which begs me to ask this question; why now?

In order to provide a holistic answer to that question, one has to assess the current social backdrop of the online community. It cannot be ignored that online media today has an ostensibly large social aspect to it and this brings about the online community- from the passive absorbers to the more fervent, avid “critiques” and activists of our time and these two groups are the very drivers of the abundance and spread of information on the conflict.

This online social environment causes one to feel a lulled sense of empowerment in which one believes he is able to initiate social change. This of course is evident today. In light of the conflict, many people through these social media sites, have not only started but also publicized many initiatives to help out those affected in the conflict. From congregational prayer events to raising funds just to name a few. The fact that it is done online allows these initiatives to reach larger audiences as well; a feat which could not be achieved in the past due to the lack of the accessibility of the internet.

For example, if one notices many people on their online feed posting articles or images specific to a certain topic, one would feel the tendency to discover why they are posting those images and at the same time, feel the need to post similar images. This is largely due to the idea of establishing solidarity and unity in thought in the online community; people want to belong in the community and they can’t help but share in order to maintain that certain online identity that allows them to be part of that online community.

However, I believe that the problem comes about though when these people do not exercise much thought and consideration in what they post. This of course is difficult to avoid in the online sphere whereby the amount of stimuli distracts one from really dedicating much time into reflecting on the implications of posting things. After all, that is precisely why online social media is so popular; it’s efficiency in connectivity.

The consequences of the failure to assess one’s words or images before posting are many but one that is rather apparent is the incitement of rather rude comments.

For example, going back to the conflict, with the massive amounts of images and videos available online, it is inevitable that there would be long lists of unnecessary comments from both of the distinct groups of the online community (the critiques and the passive absorbers) which undoubtedly would lead to more hatred from one side towards the other.

Just imagine, if a person who is neither a citizen in either country, but is supposedly well-read and knowledgeable about the conflict, comments with a considerable amount of confidence on what is going on in the area and actually accords blame to one party, one can only imagine the kind of responses he/she will get.

What could follow through to that could be an offended Israeli or Palestinian citizen. This incontrovertibly will fuel more anger towards the other online which may manifest into further actual physical provocation onto the other party in their respective countries and that would simply just exacerbate the conflict further.

Tense relations exist between the two camps and what the online community needs to be constantly aware of is the risk of actually aggravating these relations further through the posting of images. The amount of mental and emotional stress and fear a citizen in those countries goes through can never be fathomed or empathised by anybody who “googles”, though it is commendable for one to desire to find out more about the conflict. One must note though then that the intention to find out more information should not be based on one’s desire to prove someone else wrong or to rebut somebody, which symbolically would just represent an “online conflict”.

Well then, what does it leave us to do then? Do we just continue living our lives and watch the conflict unfold since posting leads to further tensions? Personally, I believe the answer to that question is actually a test of your faith in itself. Of course it is possible for us to raise awareness on the conflict and we can start initiatives to help them but ultimately one has to acknowledge the fact that there can only be so much one can do; as there are limits. Thus, one has to realise that the rest is up to god and leaving the rest to god is a test of your faith in itself; how much you are going to pray and actually have faith in what Allah decrees. After all,
[quote]“No disaster strikes except by permission of Allah. And whoever believes in Allah – He will guide his heart. And Allah is Knowing of all things.” (Qur’an 64:11)[/quote] So how much are you going to leave it up to god? 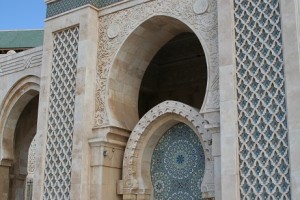 The Role of Mosques

Horace Walpole once wrote, "The world is a comedy to[...]

In the 21st century, reading from traditional print sources such[...]