On Saturday May 19 young Australian Muslim activists staged a flash mob protest against the Syrian regime at Sydney’s Darling Harbour. The group of 90 people staged the confronting flash-mob protest to raise awareness of the Syria conflict.

The flash mob, held at 1pm, ended with the release of a banner from the Western Distributor Highway overlooking the crowd stating “Silence is Betrayal”.

Organiser Mohsen Saleh, 22, said the inspiration for this unorthodox form of protest came from a YouTube video of a similar flash mob in Canada.

“This is much more powerful in my opinion. Silence. Everyone stops and stares,” said Saleh.

“This is quite striking. With protests, you don’t really know what’s going on, it’s just people cheering and chanting but this is really different.”

“I saw ‘Bashar’ and was like which country is he from, then I saw ‘Syria’ [on the signs],” she said.

“It draws attention really quickly, because you think ‘Oh what’s going on there?’ and then you stop to take a look.”

With a United Nations estimate of over 9000 dead in Syria since the nationwide uprising began early last year, attention to the cause is exactly what the organisers want.

“People who may have not known what’s happening in Syria will find out, and anyone who is against the murder of children or the murder of innocent people will be shocked to find this information,” said Asme Fahmi, 31, a participant.

Fahmi said her travels to Syria pushed her to join in.

“The leadership is built upon abuse and torture and fear. It’s just no way for anyone to live.”

The organisers hope that by raising awareness, more people will add their voices in the call against President Assad.

“What we’re trying to say is if you stay silent, you’re taking the side of the oppressor,” Saleh said. “You are not neutral.”

Video of the #FreeSyria flashmob held at Darling Harbour, Sydney, on the 19th May 2012.

A movement of young people with a vision of raising awareness for justice in the world. If we remain silent, then we betray our moral obligations by not speaking out for justice and against injustice. Join the movement! 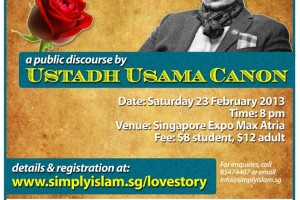 [box_dark] What: When Allah writes my love story Where: Singapore[...]

Being in this media-savvy world today, many children spend a[...]