If there’s any staple food that deserves the title of Most Versatile, it would be pasta. C’mon, pasta types count to the hundreds and pasta dishes in the thousands. In fact, did you know that in the 1800, there are already 260 types of pasta? 211 years later, imagine the pasta population!

Whether it be sautéed, or in a soup, or served with stew, or baked in a tray, or fried in a frittata; one thing remains – it’s an all-time favourite that’s here to stay for another century. I’m an ardent fan of quick-fix pasta recipes, because when I crave for it, I just wanna whip it up in a jiffy to hush the aching crave.

That being said, here’s a fuss-free, cook-while-you’re-busy-with-chores recipe that I’d like to share: Parchment-baked Linguine with Prawns. 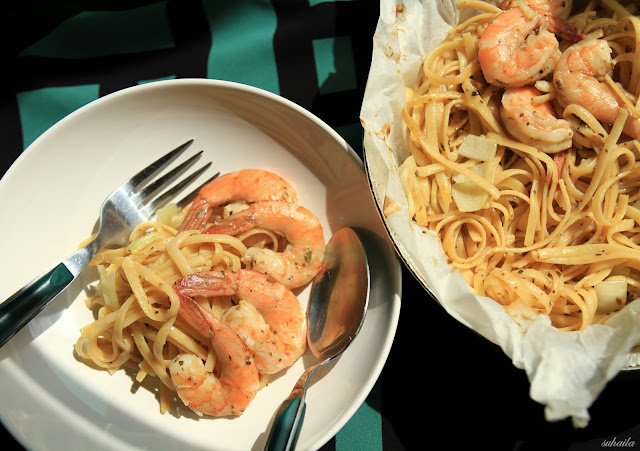 This one serves 2 (or 1 of me), so do increase the proportions of you’re cooking for more:

1) Bring a pot of liberally salt-&-peppered water to a boil and cook the linguine to al dente. Drain it and add a dollop of butter and toss it about to coat each strand. 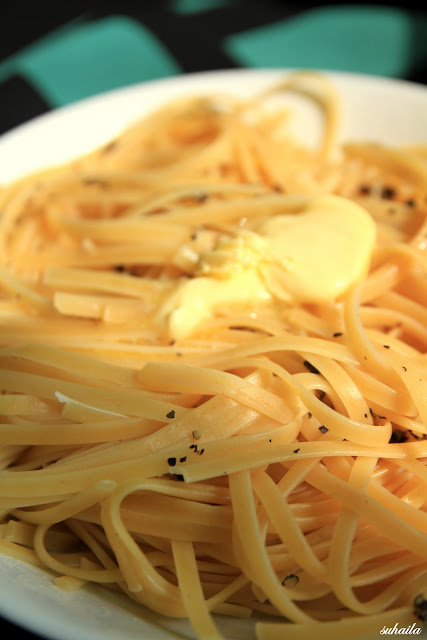 Here are a few simple good-to-know tips about boiling pasta:

Bring the water to a rolling boil before sliding in the linguine. Putting it in while the water is still cold results in al dente cooked pasta on the outer layer, whereas the centre of the pasta is solid white. By the time you wait for the whole string to cook, the outer layer would have already been mush.

For string pastas, hold the bunch in the middle of your pot before letting them all disperse into the water. This ensures that it does not clump. If it does clump, just use a fork and swirl about in the water. Easy peasy!

Salting the water liberally adds taste to the otherwise bland linguine. Also, after draining your al dente pasta, keep aside about a cup or less of the pasta water* to thin your sauce. There’s really no magic in it; it had been claimed to thicken or add flavour to your sauce of choice but plainly put, it’s just handy to have rather than fetching a cup from your kettle.

2) In a cup, mix the italian herbs, mushroom soup mix and parmesan cheese with pasta water. Once it thickens, tumble the prawns, garlic and onion in the concoction. You might want to substitute prawns with calamari rings or cubed chicken, or all of it if you’d like. It’s really a one-size-fits-all type of recipe!

3) Lay a tray with parchment paper (also known as baking sheet). Plonk your pile of linguine and top it off with the marinated prawns and dust some dried oregano over it. Now, wrap the dish in the parchment paper like a tootsie roll. The aim is to ensure that they get maximum coverage, without having the insides unglamorously spilling out in the oven. 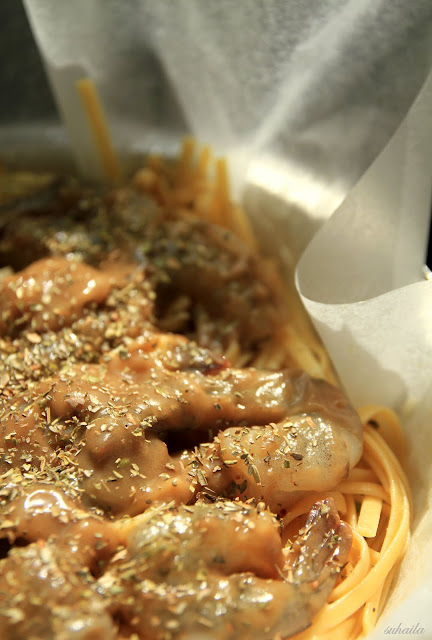 4) Bake it in the oven at 220°C for 15-20 minutes. Take extra care while eagerly opening up the sheet and take a whiff of all that goodness! Like a steam facial, only better. What cooking in the oven under wraps actually does is, it creates a sauna-like environment; you could say you have ‘steamed’ your pasta dish, melted the onions and garlic down, whilst having all the wonderful flavours absorbed fully into the linguine. It works the same if you’d like to experiment with marinara sauce and with other pasta types. 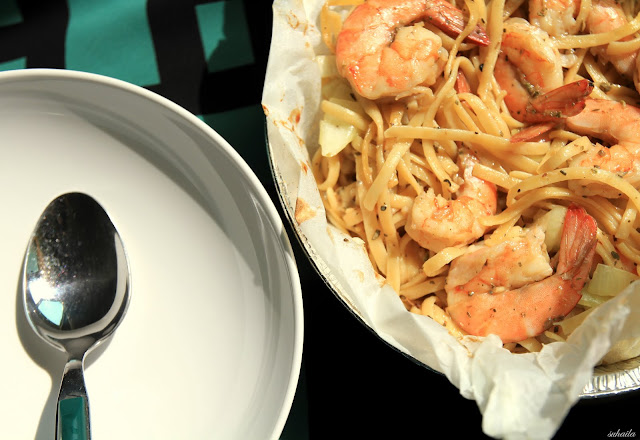 5) Give it a little toss, and serve it hot. Quick, easy, and yet oddly satisfying! 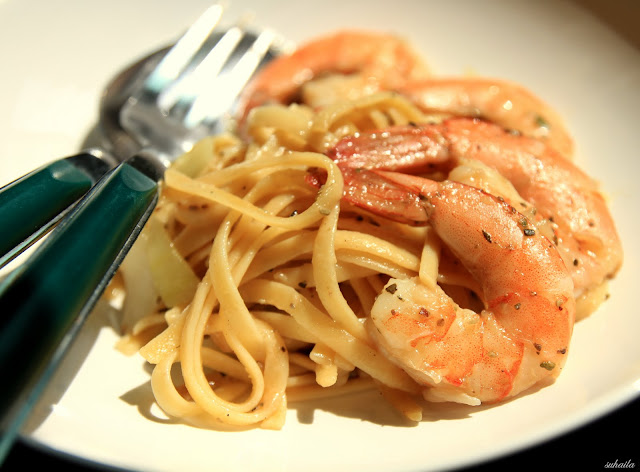 This one’s perfect for lazy Sunday afternoons, or you could bookmark it as an iftar menu in the month of Ramadhan. Just pop it in the oven say, about 30 minutes before azan and voila, ready for chow down!

Suhaila is a self-professed Food addict who loves the idea of having something that you can ogle, taste, make, share and love, all at once. She scribbles her quest for finding the perfect food places and recipes on her blog, Countless Plates.

Ingredients Cornflakes Dark Chocolate 3 tablespoons of butter for every[...]

Hijama is an ancient bloodletting technique that has been in[...]