An article of the Daly Telegraph, Parents allow under-fives to watch ‘unsuitable’ TV shows, reveals that more than half of parents in the UK allow pre-school children to view ‘adult’ television programmes such as East Enders despite fears over their content.

According to recent researches, at least 54% of parents allow their children to watch programs like Coronation Street, East Enders, The Catherine Tate Show and Hollyoaks which are adult oriented and cover issues like rape, murder, drug addiction and child abuse. Some 78% allow children to watch TV alone for around two hours a day. The results suggest that thousands of parents use TV as a baby sitter and the majority fail to monitor what the children view. If such is the situation with under-fives what about older children? Evidently, the case may be even worse.

Yet, voices have been raised against such liberal access to TV.  Recently, teachers have claimed that it might lead to a decline in discipline because of the tendency in children to imitate bad behaviour seen on TV. The Association of Teachers and Lecturers had already warned some two years ago that access to TV without supervision leads to an increase in pupils mimicking catchphrases, swearing, storming out of classrooms and answering back.

[pullquote_left]Access to TV without supervision leads to an increase in pupils mimicking catchphrases, swearing, storming out of classrooms and answering back.[/pullquote_left]

This raises a very serious issue of children’s education and more specifically that of the role and duty of parents. It is sad & unfortunate that in many countries where the state has taken responsibility to provide education to children, parents have found an easy way out by delegating their own over to schools and teachers. In some ‘advanced’ societies, laws and rights, notably through different conventions, protocols and declarations such as the Universal Declaration of the Rights of Children have only helped to shift the responsibility of education of children from the shoulders of parents to those of the authorities with a result in increase in promiscuity, prostitution, drug addiction and a rise in juvenile violence, in other words they have produced a generation of immoral hedonistic people devoid of any ideal in life or ideology.

It is not to enough to emphasize that Muslim parents must be extremely vigilant in upbringing those God-given gifts, the ‘adornments of this life’ (1) that are our children. To illustrate its importance it is quite appropriate here to refer to a case reported by Khatidja Anderson in her writing ‘Western Education and Muslim Children’: “When someone suggested to an immigrant sister that she should not let her children watch so much TV, and instead, teach them about their deen, she said that only Allah made people Muslims and she prayed that Allah would make her children Muslims. She honestly didn’t understand the concept of educating her children about Islam.” (1) Such an attitude is totally contrary to Islam and the teachings of the Prophet (SAW). We must differentiate between being born Islamic according to Allah’ (SWT) will and the making of a Muslim through proper education.

Abu Huraira narrated that Allah’s Messenger (SAW) said, “No child is born except on Al-Fitra (Islam) and then his parents make him Jewish, Christian or Magian, as an animal produces a perfect young animal: do you see any part of its body amputated?”.(3) So, making Muslims of our children depends on us and the efforts that we are willing to put in.

It is not in our intention to tell parents what they should or should not do to bring up their children on the ‘right path’; it is too great a responsibility but only to provide humbly some information and some guidelines set by  the Holy Book and some ahadith which may enlighten them in this most sacred duty.

In Islam childhood is a special period in a person’s life so much so that a rich vocabulary exists in Arabic to describe each stage of development from the womb to the age of twenty one. The general term for a child is walad, but janin is the baby in the womb (the fetus), tifl is the baby at birth. After seven days it becomes a sadigh and before it is weaned it is sabiyy or sabiyya. A boy is a ghulam and a young man is a habab. He reaches the stage of tamiyiz when he starts discerning between right and wrong. A child who dies before adulthood is farat. (2)

Following a hadith of the Prophet (SAW), a child’s upbringing is divided into three stages: “The child is the master for seven years; and a slave for seven years and a vizier for seven years; so if he grows into a good character within 21 years, well and good; otherwise leave him alone because you have discharged your responsibility before Allah.” He also recommended that the child be taught to perform salaat as from the age of seven.

It is the duty of parents to teach their children Islam.

Our children are a trust (amanah) that Allah (SWT) has entrusted onto us and the texts of the Holy Quran also warn the one who does not look after his flock sincerely and who neglects the trust with which Allah (SWT) has entrusted him.  It was narrated that Ma’qil ibn Yasaar al-Muzani said: ‘I heard the Messenger of Allah (SAW) say: “There is no person whom Allah (SWT) puts in charge of others, and when he dies he is insincere to his subjects, but Allah (SWT) will forbid Paradise to him.”.

A verse from the Holy Quran says: “O you who believe! Ward off yourselves and your families against a Fire (Hell) …” (5)

The Prophet (SAW) said: Order your children to pray at the age of seven. And beat them [lightly] if they do not do so by the age of ten.  And separate them in their bedding.(7)

The following hadith narrated by `Abdullah ibn Fazl from the fifth or sixth Imam: “When the child reaches 3 years of age, teach him seven times to recite la ilaha il-lal lâh.”

Not many books are available on this subject. Child Education in Islam, by Abdullah Nasih Ulwan, is the only one we have been able to lay our hands on. It can be downloaded on the Internet. On the other hand, there are numerous interesting sites which deal with the subject on educating children in Islam like Islamic Research Foundation at http://www.irfi.org/articles/articles.

3.   Encyclopedia of children and Childhood in History and Societies. Islam – Islamic Law, A Child’s Upbringing, Duties of Parents … www.faqs.org/childhood/In-Ke/Islam.html

6.  Hadith – Dawud, Narrated As-Saburah (AS) [Also recorded by Ahmand and al-Hakim. Al-Syuti has give in a notation signifying that it is authentic. Al-Albani has graded it hasan. Al-Albani, Sahih al-Jami, vol. 2, p. 1021.] 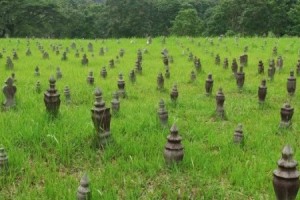 Today, I Saw My Grandparents’ Bones

Dear reader, I am not sure what benefit this note[...]