I came across this video on Misrepresentation of women in the Media. And while it was focused on American television, I think I can safely say that most of our media consumption do come from that area of the world. Here’s the video:

And here’s a poem on “Our Rightful Heroines”:

True, sincere, believing women of the past
Who in their lives remained faithful and steadfast
Amazing were they, those women who believed
Who hastened to the truth as the Qur’an was revealed
To forever leave behind the old, ignorant ways
Passed down by their forefathers, in the bygone days
Accepting the truth, in utter awe of their lord
Memorizing His divine pearls, word by word

Khadija Al-Kubra, the Prophet’s most beloved
Upon her, wealth and wisdom was bestowed
Her wealth, she flourished generously on the poor
Her wisdom helped the Prophet believe in the noor
The light of the angels who brought glad tidings
Of prophethood, a lifetime full of blessings
She was one of the first Muslims who believed
Whilst the majority had refused and rejected
Although, Islam’s early days did she pass away
In the Prophet’s heart and memory she did stay

Rare women today who like Fatima Az-Zahra
The youngest daughter of Khadija Al-Kubra
As a little girl, she bravely helped her father
From the disbelievers, when he was in prayer
Whilst they mocked, she stood firm to protect
What she believed in and her father, the noble Prophet
She grew up to be most patient in all her burden
So rightfully earned, she was promised the garden

The memory of Summayyah, within us it still remains
The first martyr of Islam as she endured all pains
Abu Jahl did beat her as she lay on the blazing sand
Why she strongly held onto Islam he could not understand
The truth that Summayyah saw was hidden from his eyes
With sabr, she refused once and again to believe in his lies
Infuriated to the limit, Abu Jahl lunged forward his spear
Putting an end to her life, and she welcomed it without fear
To meet Allah Almighty, to enter the highest rank in Jannah
An end to her suffering, a start of a new beginning

Aisha Bint Abi-Bakr, the greatest scholar of all time
So gifted with knowledge was she, beyond the boundary
People came looking for her, from all over the country
To benefit from her ilm, to hear her advice
Learning from the Prophet, she came to be wise
She turned to Allah, when she was wronged in slander
All around the city of Makkah, tongues did wander
Allah came to her aid, as He knew her to be pure
As mother of the believers, she did remain true

Mentioned in the Quran, is Maryam Bint Imran
Allah’s chosen “above all women of the world”
Mother of Prophet Isa, the purest of all women
Allah provided for her when she was in seclusion
Living only for Him, she was in His protection
Obedient was she when she was told to leave
All her people behind, in order to conceive
In her chastity, a baby boy, a most unique miracle
And patient was she, when she came back to her people
Mocking her that she had disgraced her noble family
Jesus in the cradle had spoken words of true reality
Preached as a baby, a sign of his mother’s purity
No doubt, Maryam was unique in every way
And will indeed remain so, until the last day

Last but not least is Asiya, wife of Pharaoh
One of the four most perfect women in Islam
Who had adopted Musa, his life she had saved
With the will of Allah, like a son he’d been loved
To grow up in Firaun’s eyes, his future untold
He had guided Asiya, pulled her into the fold
Of truth, to believe in the Oneness of the Creator
Instead of Pharaoh, a most deceitful transgressor
To Allah only she did seek His help in desperation
When she went against her husband, for protection
Hoping to reside in paradise with Allah Almighty

Oh how true were the believing women of Islam
To their Lord and Creator, with strong, solid Iman
They are many, and they all command a sense of respect
They lived their lives righteously, with little regret
Fighting all temptations of life, to live for Allah

What happened then to the Muslimahs of today?
Why are they throwing their precious deen away?
The deen in which women are most honored
A gift from Allah Most High that is sacred
O Allah, I ask you to open their eyes to see
How truly blessed in Islam they could be.. 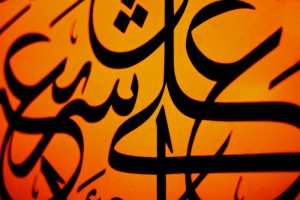 “At this very moment, while you are reading these words,[...]