A campaign to educate the public about the Islamic meaning of Jihad launched last week in Chicago.

City buses and trains will carry advertisements from the “MyJihad Educational Campaign,” sharing the idea of Jihad – which means a personal struggle for improvement – that most Muslims practice.

It is an independent project created by Ahmed Rehab, the executive director of the Chicago office of the Council of American-Islamic Relations.

“The MyJihad campaign in about reclaiming Jihad from the Muslim and anti-Muslim extremists who ironically, but not surprisingly, see eye to eye on Jihad,” he said in a press release.

The Facebook page has more than 3,700 “likes” and includes posts such as “My jihad is world peace!”

“We have been overwhelmed with the participation of people of other faiths tweeting their struggles,” said Angie Emara, a campaign volunteer from Naperville, Illinois.

“We don’t think it’s controversial,” said Pamela Geller, the executive director of the American Freedom Defense Initiative. “It’s truth. The MTA has run anti-Israel ads before and no one had an issue about it. ‘Any war on innocent civilians is savagery’: What’s controversial here?”

The ads have been running since October & has drawn backlash from not only the Muslims but other faith groups who condemn what they call ‘hate speech’.

Rehab said the “My Jihad” ads are meant to counter the misrepresentation of Islam perpetuated in part due to Muslim extremists but also due to “attempts at public indoctrination by Islamophobes.”

He said the campaign aims to create a more knowledgeable understanding of Islam.

“Most of all, this campaign is about giving voice to our views, our practices, and simply put, our reality, a reality that is too big to be left out of the conversation,” he said. 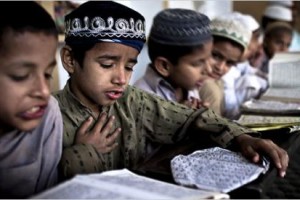 Pakistan Takes An Initiative to Stop Radicalism in Madrasas Around

The surge of promoting religious extremism by the local madrasas[...]

“Coming from different walks of life, experiences and backgrounds, we[...]