Countries in the East Africa region – Ethiopia, Kenya and others have always been facing daily struggles for survival. Essential needs to sustain the human body are deemed to be scarce in these countries for decades, but the situation has taken a turn for the worst recently.

[pullquote_left]Somalia has been declared as the worst affected state of the crisis and aid, seems to be crucial at this point despite most organizations deeming it to be beyond any help.[/pullquote_left]

Somalia has been declared as the worst affected state of the crisis and aid, seems to be crucial at this point despite most organizations deeming it to be beyond any help.

Unaware to most commoners, and perhaps members of the community unreached by information, most Somalis are Muslims. This under-emphasised fact as well as the mounting heaps of hope derived from humanity is what inspired a group of youths to embark on a project to save East Africa.

Ease Africa 2011, was a collaborated idea of high-spirited yet mellow-minded youths who come together all in the name of charity and saving others.

They hope that apart from the funds raised for the crisis, this effort would inspire others and especially young people to come together for a better world to live in.

When asked about what triggered the initiative behind this humble effort, Sumaiyah Mohamed, a student from the National University of Singapore said:

“I read an article by Ustadh Khalid Latiff on Huffington Post and it just shook me so I started a bake sale to raise funds. Many people helped bake, collected funds and wanted to help by their own various means. So a friend suggested to me that we should all combine ideas and resources together to do something because we could make a bigger impact that way.”

Despite many media sources claiming these countries in crisis to be beyond aid, these young men and women placed their faiths in continuing their plans to make this event a success.

Another member of the organizing committee, Mas’uud Ibnu, explains what drives them to contribute to this effort amidst their tight schedules and the media claims of the crisis:

“Nobody deserves to die. No matter how terrible a particular crisis is, no matter how bleak its future seems, it is the responsibility of everyone to do everything they can to help save the lives of the unfortunate. Everything is beyond us if we don’t try to reach for it.”

The event is set to be held on the 16th of September 2011, this Friday, at Ar-Raudhah mosque from 5.30pm onwards. A forum will be held with speakers Dr Albakri Ahmad, the Dean of Muis Academy, as well as Ustadh Haron Hassan Akhtar alongside performances by Qasidah group, Madeehul Mustafa, and local Nasheed singer, Syamil. Programme Itinerary includes Selawat recitation and Hajat prayers with intentions to ease those in midst of the crisis. Dinner will be provided and tickets are currently on sale.

Speaking on the objectives of this event in the long-run, a member of the Singapore Muslim Students Overseas (SMSO) and of the committee, Shehzhadee Abdul Rahman explains:

“We feel this will be a good opportunity, a stepping stone to form an umbrella organization in the future where all Muslim societies of all the tertiary institutes come together instead of working in their respective circles to create a sense of unity. We aim to inspire a collective effort by Muslim youths and we want this to continue.”

Tickets are sold at SGD 10 each and donations can also be made to contribute into this effort. More details can be found on their Facebook event page here:

and you can also show your support on their community page here:

[pullquote_right]If you had not been born here, you could’ve been born in famine-stricken Somalia or the realms of violence in Gaza or anywhere else you hadn’t wished to be born in.[/pullquote_right]

The essence of humanity comes from the nature of human beings ourselves. With that, it means to be humane regardless of creed, gender, faith, beliefs or principles. If you had not been born here, you could’ve been born in famine-stricken Somalia or the realms of violence in Gaza or anywhere else you hadn’t wished to be born in.

That child dying out of nothing could have been your child, a future leader of his community or possibly, you.

Nobody can measure the differences you make in this life or put a limit to it. Let them say it is beyond the reach of help, or that nothing can be saved, but nothing else is more fulfilling than to know a life is existing today because of you from Him, or that at least, you were responsible for that smile on the sunken faces of mankind by His Grace & Will.

These young souls can only strive to inspire and educate others on the realities of this crisis of which they put their faith and hopes in selflessly. But it is only up to you, to be inspired and educated.

Make a difference, be real and do something.

As an introduction in close relevance to the theme of[...] 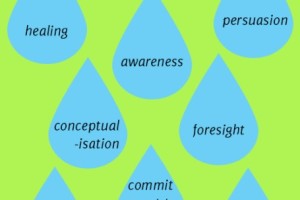 11 Ways to be A Better Leader