Home Spirituality Faith Matters Give And Let Give

A few days ago while I was walking home from an evening with happy friends and good food thanks to Geylang Bazaar’s annual ode to deep-frying, I experienced something that made me think about the simplest of acts and the most fundamental of all pleasures – giving and receiving.

I was walking along a stretch of shops leading up to the entrance of Paya Lebar MRT station, fiddling with the receipts and spare change that live rent-free in my pocket and catching blow-kisses from the rows of sushi sitting on shop displays. I didn’t have a care in the world and I was ready to get home fast so I could crash into bed. That was when I saw an old lady sitting on the bare pavement.

Her gaze fixed upon mine for just a second before she slowly turned her head down. Her hands remained resolutely outstretched in front of her – as if she was feebly hopeful and yet too ashamed to demand. Instantly, it broke my heart a little knowing that all I could offer was a few dollars, which was hardly any respite against the cold night waiting ahead of her.

I fished out $2, a miniscule offering by any means, and bent down to place it in her hands. I hoped to catch her glance again so that I might furnish my small donation with a smile as my way of conveying some form of warmth and affection. She thanked me, and I carried on walking towards the MRT station. There was a bakery up ahead, and I was eager to wink at the chocolate glazed donuts.

Just then, a well-dressed lady tapped on my shoulder. “Next time don’t give money,” she said to me hurriedly, “These people are all syndicated. They pretend to sit only; later their boss will come and fetch them.” Before I could reply, she had scurried off to catch her train. I was left completely and utterly stunned by her little public service announcement! “Pretend to sit?” Was she trying to tell me that if I looked close enough, I’d find that the street beggar was actually hovering over the cold, hard pavement?

Kindness, Where Art Thou? The more I thought about it, the angrier I became. What a cold and unforgiving place this must be for the homeless and the poor. Where do they go to sleep at night? Do they ever go hungry? What family do they have? I rarely think beyond these silent queries in my head. With just a small donation, I often allow myself to move on with my life. The questions would remain unanswered – pushed to the back of my mind for some other time.

[pullquote_left]Giving alms to a street beggar is like the hit-and-run of giving – so small and fleeting, free of any commitment or afterthought.[/pullquote_left]

I’ve always felt that giving alms to a street beggar is like the hit-and-run of giving – so small and fleeting, free of any commitment or afterthought. And yet, it remains as one of the last bastions of kindness left in our society where so little thought is given to the desperate and the destitute. It made me furious to think that there were people who would actively take this away from us.

I soon calmed down and realized that she probably meant well, and that she must have believed everything she had said. I couldn’t argue that it wasn’t true – it’s common knowledge that there are syndicates that plant elderly people in crowded locales to beg for money.

But if this is what you choose to believe, why aren’t you asking more questions? Why do these syndicates exist? What are you doing to stop them? What are you doing to help these victims who are being used and abused by such syndicates? It’s way too easy for anyone to just proclaim that they’re not going to give any money to street beggars because it feeds criminal syndicates, full stop. That is not a stand; it is an outrage.

It only allows these syndicates to shed a dark shadow on the people who really do need our help – beggars on the street who live day by day relying on what little donations we can afford to drop their way. So unless you have some sort of barcode scanner that allows you to weed out these ‘mafia-beggars’ from the real ones, I don’t think that you’re in any position to stop others from giving money to them.

I’ve also encountered another strange phenomenon that relates to giving money to street beggars. (I hate using the word beggar, but I think that’s just another typical Singaporean syndrome – that it disturbs me to acknowledge something real and ugly existing in our society so I tend to mask it as guilt over a simple word, when in fact I simply hate reminding myself that we have beggars on our streets because I’m too deeply rooted to our general atmosphere of pretense and selective-ignorance when it comes to the images that we project in our own heads about our first-world city.)

When I discussed the issue of street beggars with my friends, some revealed candidly that they often feel self-conscious or shy about donating to street beggars in crowded areas. Others even feel the same way about feeding stray cats! And I cannot deny that I feel the same way too sometimes; it’s simply another symptom of this strange bubble we live in.

When I’m walking in a crowd that’s pouring out of an MRT station, it almost feels like I’m part of a mass synchronized performance and we’ve all made a silent pact to avoid making eye contact with the old auntie selling tissue at the exit steps or the uncle sitting on his wheelchair, playing his guitar by the traffic light. Even when I’m with friends, it feels as if it would be a great taboo to interrupt our conversation and acknowledge the street beggar sitting right in front of us.

When I think about reaching for some change in my pocket, I almost feel like I’m betraying my comrades, as if I’m about to make everyone feel bad for not doing the same. Worse still, I will now wonder if I’m about to be confronted by an irate passerby for supporting syndicated beggars.

A Culture of Giving

Over time, I’ve come to learn that people can just as easily ignore you, as they may choose to ignore the street beggar. And I’ve decided that I can just as easily ignore overbearing passersby and their unsolicited advice as well. Do you know how it makes me feel when I see someone handing money to a street beggar? It gives me a feeling of hope and it inspires me to do the same. Perhaps not right then, but maybe next time. It plants a seed in my heart and that’s something.

My objective here is not to encourage anyone to start giving to street beggars. I have always believed that is entirely up to the individual. But if you are compelled to give to street beggars and the reasons that I have stated above have categorically prevented you from doing so, I hope I have encouraged you to do as your heart commands.

This might seem so silly to most people – that I’m trying so hard to convince readers that it’s okay to put money into the hands of a street beggar. First world problems, right? Is this really necessary, some of you might ask? I believe it is. And if my words resonate with just one person, then it’s all worth it. After all, there is no better time than Ramadan for us to celebrate the gift of goodwill and to embark on a fresh journey of self-reflection!

The Amazing Baju Kurung – Choosing The Right One

You might have noticed from the mini-bazaars popping up at[...] 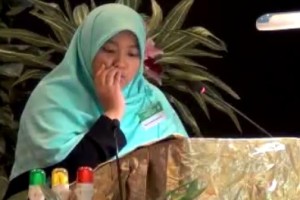 A tribute to the Prophet (S) in his month, Sha’ban

How can my mind understand your greatness? Oh one whom[...]

Leave a Reply to Rafiq