Nufayr narrates that they were once sitting with Miqdaad bin Aswad when someone passed by.

The person said, “Blessed are the eyes that saw Rasulullah (ص). By Allah! We dearly wish that we had seen what you saw and were present in the gatherings you were present in!”

Nufayr says that he had heard the man carefully and (when Miqdaad – became angry) he was surprised because the man had good words to say.

Turning to the man, Miqdaad said, ‘What makes you people wish to be present at a time that Allah made you absent from, without you knowing what would have become of you had you been present then?

By Allah! There were many people who were present during the time of Rasulullah but Allah had thrown then headlong into Jahannam because they did not accept him and refused to believe him.

Will you people rather not thank Allah for being born as people who know only Allah as your Rabb and believing in everything that Rasulullah (ص) brought? (You were fortunate that) Hardships had been borne by people other than yourselves.”

“I swear by Allah, that Allah sent Rasulullah (ص) as a Rasul during a time that was more difficult than any other time in which Allah had sent Prophets. It was a time when the succession of Prophets had long been paused and when people were steeped in ignorance. People saw no religion better than idol-worship.

Rasulullah (ص) arrived with a criterion (the Qur’an) that  differentiated between truth and falsehood and even divided father and son.

The situation was (so heartbreaking) that a (Muslim) person whose heart was unlocked to be filled with Imaan had to see his father or his son or his brotherlive as a kafir knowing well that whoever enters Jahannam shall be destroyed.

He was therefore unable to experience any coolness (comfort) knowing that his close relative was destined for Jahannam.

It is about this that Allah says in the Qur’aan:

[box_dark]O our Rabb! Grant us the coolness (comfort) of our eyes from our spouses and children. {Surah Furqaan, verse 74)[/box_dark]

Abu Nu’aym in Hilya (Vol.1 Pg.175). Tabraani has also narrated a similar Hadith and Havthami (Vo1.6 p.g.17) has commented on the chain of narrators. 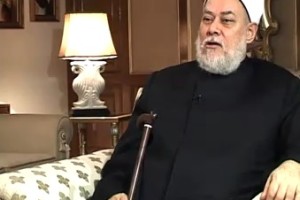 So you've met someone you think can lead you in[...]