Facebook Fatwas, the Issue of “In Shaa Allah” and Appreciating our Scholars

Home Features Opinion Facebook Fatwas, the Issue of “In Shaa Allah” and Appreciating our Scholars

Facebook Fatwas, the Issue of “In Shaa Allah” and Appreciating our Scholars

The above image made the rounds on the usual social media suspects (Facebook, Twitter, Tumblr, et al) recently. The person in the picture is Dr. Zakir Naik, a well known da’i whose specialty is comparative theology. A spokesperson for Dr. Zakir Naik has refuted it, saying that Dr. Zakir made no such statement, and many others have pointed out that using the Roman alphabet to transliterate Arabic will inevitably be flawed, and what is important is that our pronunciation is correct and understood by others, rather than how it is written.

Indeed, were that the case most of us in Singapore and Malaysia would be guilty of kufr given the standard method of writing ‘insha Allah’ for the Malays is “insya Allah”, as would the inhabitants of former French colonies in North Africa, who spell it “incha Allah”.

For those who don’t understand Malay, the ustaz here basically explains that in Arabic, ‘create Allah’ (naudhubillah) would more accurately be translated as ‘aansha Allah’.

There are several issues here. Though it should be noted that the above statement is not actually attributed to Dr Zakir Naik, putting his face next to the statement effectively associates him with it and people will have the impression that he himself said it. I myself have seen it being attributed to him several times. While I am not certain whether the charge would hold up in a court of law, I believe this amounts to libel.

Secondly, I believe this incident stresses the importance for all Muslims, especially for those seeking to be students of knowledge, to learn Arabic so as to better discern the accuracy of such statements for themselves.

Thirdly, people should accept what they hear, see and read online with a pinch of salt. The above ‘quotation’ by Abraham Lincoln illustrates that clearly, I believe. Though it is good and important to have our social media feeds full of knowledge and inspiration, it is just as important that we do not take it as our primary source of knowledge, and to verify anything we come across online with knowledgeable scholars to avoid confusion. I’m reminded of the following hadith:

“Truly, Allah does not remove Sacred Knowledge by taking it out of servants, but rather by taking back the souls of Islamic scholars [in death], until, when He has not left a single scholar, the people take the ignorant as leaders, who are asked for and who give Islamic legal opinion without knowledge, misguided and misguiding”

Prophet Muhammad (Peace and blessings be upon him), on the authority of ibn Umar (Bukhari)

I reflected on this hadith and the whole issue of “in shaa Allah” recently and realised that I never had the chance to sit and gain knowledge from the many great scholars who lived locally and were alive in my lifetime. I know their names, have heard praises of them from minbars, microphones and in majalis, and in some cases read their books and learned from their teachings; yet I know them not, at least not intimately.

I wish sometimes that I could turn back time and sit at the feet of Ustaz Syed Ahmad Semait, Ustaz Syed Abdillah Al-Jufri, Shaykh Zakaria Bagharib, Shaykh Umar Al-Khatib, and others, and gain knowledge and baraka from their presence. But that is just wishful thinking on my part. Though I was not able to gain from the ulama who have gone, I feel blessed that Allah has allowed me to learn from other knowledgeable teachers, who are still alive and doing da’wah. Though we may no longer have the likes of Imam As-Shafi’i, Imam Al-Ghazali or even the ulama whom I mentioned earlier, their knowledge is passed down insha Allah by their students and successors.

I have had conversations with friends about making Islamic knowledge available online to make it accessible to everybody and while I don’t disagree with that, there is more baraka in making the effort to seek out classes and teachers of the Islamic sciences. After all, we know from our Prophet (peace and blessings be upon him) in a hadith qudsi that Allah says of his servants “When he comes towards Me walking, I go towards him running.”

Instead of passively absorbing knowledge through our computer screens whenever it happens to pop up, let us take that step towards Allah by attending classes of Islamic knowledge. In doing so we take the learned rather than the ignorant as our leaders, and only then can we appreciate the true value of our teachers who are still here by sitting with them, gaining from the knowledge passed down from teacher to student, all the way back to the Beloved Messenger (peace and blessings be upon him) and gaining the baraka of a majlis of ilm, sitting in the company not only of fellow seekers of knowledge but also Allah’s angels.

[box_dark]What: Seerah Retreat Where: SimplyIslam Who: Shaykh Ahmad Saad When:[...] 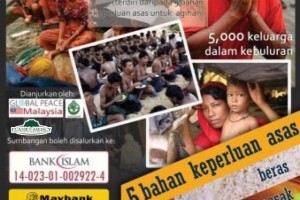 It has been almost 2 months since violence has erupted[...]