What: Youth aLIVE Discourse – The Series

“Glorifying our Heritage, Emulating the Legacy – inspirations from our Islamic Civilisation”

The 5th run of Youth aLIVE Discourse certainly lived up to its promise of inspiring its audience through Islam’s colourful past with its three truly inspiring lectures that brought the audience on a journey that began from the introduction, spread and influence of Islam in the Malay world to a brief historical lesson on the different Islamic empires and their influence on the world and finally culminating in a lesson on how to truly appreciate the message behind Islamic art and architecture that can be easily found in our present time.

The Geniuses Who Gave Us Islam: The Spread of Islam in the Malay Word and What We Can Learn From Itl

The discourse began with its Keynote speech by Dr Syed Muhd Khairudin Aljunied titled “The Geniuses Who Gave Us Islam: The Spread of Islam in the Malay World and What We Can Learn From It.

Dr Khairudin, an Assistant Professor from NUS who is also actively involved in projects for social reform and development of youth, stunned the audience by opening his lecture with the statement:

He explained that in order to be a Muslim, one has to have the intelligence to learn and understand the commandments that has been set by Allah SWT which includes:

The problem of the present is that people value things that are unimportant and a way to fight this problem is for people to be Geniuses.

But what exactly is a Genius?

According to Dr. Khairudin, a Genius is someone who is made up of three important characteristics:

1)     One who displays exceptional intellectual and creative abilities.

2)     One who uses his or her God-given gifts to benefit others.

3)     One who creates positive and wide-ranging changes in society.

Dr. Khairudin further explained that it was only through the hard work of five types of Geniuses that Islam was spread, accepted and had elevated the status of the Malays who, prior to Islam, had been Animists for about 35000 years and Hindu-Buddhists for around 1300 years after that and then climaxed with the Golden Age of Islam in the Malay world from about 1400AD to 1800AD.

This also resulted in Muslim-Malays/Indonesians making up 88.2% of the entire Muslim population of the world.

That is not to say that there may not be another Islamic Golden Age in this region, InsyaAllah.

The five Geniuses that Dr Khairudin mentioned are:

The first Muslims to reach land of the Malays discovered that Hindu-Malays were a highly cultured people who were very fond sports and entertainment and had also cultivated and defined their own brand of manners.

The Culture Geniuses decided that instead of replacing the Hindu-Malay culture wholesale with theirs, they learned and studied the Malay culture and eventually infused aspects of Islam into it.

Examples of these are the telling of the stories of Prophet Muhmammad (S) and his companions through the extremely popular wayang kulit (shadow puppets) and syairs (the Malay version of spoken word poetry). Also through these forms of cultural entertainment did the Cultural Geniuses manage to gradually introduce the Islamic concept of modesty.

Some of the Culture Geniuses are better known as the Wali Songo whose efforts of integrating and infusing Islam into Malay culture truly helped the rapid spread of Islam throughout the region.

An Arab by the name of Abu Hamid Ibnu Fadlan introduced soap to the Russian Caucasus after discovering that the people there did not have a very good sense of hygiene. This simple act resulted in many of them converting into Islam.

When the Arabs first arrived, they discovered that the Malay world was an important place of commerce where traders and businessmen were held in high respect.

But the fascinating aspect about business in the Malay world is that women were the ones who controlled these businesses and in order to trade with these women, a foreign trader had to establish relations with them, usually through marriage.

The Entrepreneurial Geniuses, being successful businessmen themselves, assisted in the spread of Islam by explaining the religion to the Malays while dealing with them. They also intermarried with the Malays, which is why the Malays at present tend to look quite different from one another.

Malay businessmen of the past soon converted into Islam as they tried to emulate the successes of these Entrepreneurial Geniuses.

Dr. Khairudin then showed a video on YouTube titled “Spread of Islam” which showed the increasing population of Muslims throughout the western world. It is definitely worth watching.

“When you simplify your life, you become powerful people.”

The third type of Genius was the Spiritual Genius who discovered that the Malays held on to a lot of strange and spiritual beliefs.

They introduced Islam to the Malays as a way of simplifying their beliefs:

–          Introduced the belief of karamah or keramat, which is to visit the graves of once important Muslims, to appreciate the effort that these people had put in to spread Islam.

With these simplified beliefs, the Spiritual Geniuses managed to remove the culture of fear and excess from the Malays that enabled them to live life simply and focus only on Allah SWT.

Then there were the Intellectual Geniuses in the form of Muslim scholars who discovered that Malays had their own philosophy, or falsafa, that can be found in the Malay language.

As the Geniuses learned and mastered the Malay language, they introduced Islamic Arabic words such as Akal, Roh and Ilmu to influence the Malay mind towards Islamic thinking.

The Malay language kept evolving as it incorporated more Arabic and Persian words till the point that the Malays themselves developed writing Malay in Arabic script known as Jawi that served to bridge the gap between Arabic and Malay.

This raised the status of Malays in the intellectual field which produced many scholars who themselves travelled to various parts of the Muslim world to learn and teach.

“If you want to spread Islam, be a politician.”

Arguably the most important Genius was the Visionary Genius and they were the Kings and Rulers of the Malay world who, after embracing Islam, used their vision, power and influence to spread the Deen throughout their kingdoms and territories.

These rulers, such as the Kings of Aceh, Terrengganu and the powerful women Rajas of Pattani also build and supported mosques, which became community centers and hubs of Islamic activities and Pondoks, places where people went to study Islam.

Why were they successful?

Spreading Islam in a region that is very proud of their current beliefs and culture is no walk in the park. But the Geniuses were successful due to several important values that they held on tightly to and which every Muslim should look to learn from and emulate.

Firstly, the Geniuses always had Allah in their minds. They lived and breathed the Quran and strived with pure sincerity to spread the Word of Allah SWT.

The Geniuses knew the importance of being sensitive and aware of the developments of their surroundings. They incorporated the laws of Islam into the culture of the Malays instead of replacing it wholesale that would have been met with fierce resistance.

Working hand in hand, the Geniuses tapped on each other’s specialties and expertise to help their cause.

Various creative ways and means were used to incorporate Islam into the Malay culture. The Geniuses were also patient and would use different strategies whenever something did not work. They travelled far and wide and took many years to achieve their goal of spreading Islam.

The Geniuses were highly specialized in their own fields. They were committed to improving themselves in those fields and eventually used it in their work to great benefit.

Dr. Khairudin concluded by stating that in order to be truly successful in the world and hereafter, it is very important for Muslims to learn and understand their heritage and history and by appreciating the efforts that their Muslim forefathers did to spread the Islam while history being a prime example of how Islam can elevate and inspire anyone through intellect, strength and culture.

“I learned to appreciate Islam architecture more and can see that Islam is growing.”

“I felt that Dr Khairudin’s talk was really engaging and influential.”

Added that she now knows more about how the Malay Islamic Empire was formed. 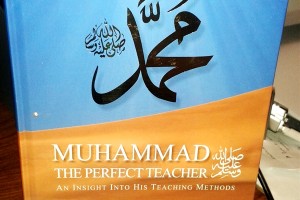 Muhammad (saw) The Perfect Teacher: An Insight Into His Teaching Methods

Book Review: Muhammad (saw) The Perfect Teacher: An Insight Into His[...]