What: Lecture “When Allah Rewrites My Life”
Where: Singapore Expo Max Atria
Who: Ustadh Usama Canon
When: 6 December 2014
By: SimplyIslam

When Allah Rewrites My Life, held at the Singapore Expo Max Atria on Saturday, 6th December, was Ustadh’s second public lecture of the Clarity and Balance Tour. Ustadh Abdul Hakeem, imam of Masjid Sultan, opened the evening’s lecture with the recitation of the opening verses from Surah Taha in the Qur’an, followed by the recitation of some verses from Qasidah Burdah.

Ustadh Usama opened his lectured by saying that he was glad to be back in Singapore, as travelling reminds one that there are bigger things than one’s own concerns. He encouraged all of those present to look at things in a positive light despite all negativity that might be happening in the world. He stated that we live in a time where there is much to object to, but our objection is a reminder that we are still concerned about the world, in an age when 30% of college students saw life as meaningless and existential, as cited in a recent survey.

Allah’s Knowledge and Our Ignorance

Ustadh Usama said that human beings view everything from our finite, limited understanding of the world, whereas Allah is All-Knowing, and due to His Omniscience He is the only one whose view is truly objective, as it is not coloured by experience or perspectives.

Ustadh Usama related this back to the story of Nabi Musa and Khidr in Surah al-Kahf, and Nabi Musa could not outwardly make sense of what Khidr was doing, despite his being a prophet who received revelation from Allah. He spoke of the story of Nabi Musa and Khidr sitting on the beach observing a bird who dipped his beak in the water, and Khidr said the knowledge of all of creation was like the water in the bird’s beak compared to the oceans of Allah’s infinite knowledge.

The true purpose of life, Ustadh Usama said, is to know God, which he referred to by the Greek terms of gnosis and episteme. Quoting from Surah Adh Dhariyat, he said the verse “I did not create jinn and man except to worship me” was often interpreted by the scholars of Qur’anic tafsir to mean that the creation of man and jinn was so that we would gain knowledge of Allah.

Ustadh Usama explained further, saying that we do not believe in a god who only does “good things”, criticising the notion some have that God must not exist if things do not go exactly as they wanted. As Muslims we believed in a God who encompassed both beauty and majesty, creates both good and bad, and gives both wealth and poverty, as well as both health and sickness.

Allah’s plans and our plans

Ustadh Usama related a Hadith Qudsi, in which Allah says, “O my servants! You want and I want, but I do whatever I want. If you leave what you want for what I want, then I will be for you whatever you want.”

The ustadh explained that the meaning of this was that we should submit our desires to the will of Allah in such a way that whatever happens, we say mashAllah. Returning to the title of the lecture, he said Allah rewrites our story by allowing us to find contentment with His divine decree, regardless of whether what happens is in line with what we originally wanted.

The ustadh emphasised that trusting in Allah’s decree did not mean that we should live our lives without planning for the future. Rather, we should plan without worrying about the outcome,and remember that our plans fall within Allah’s divine plan.

He related the story of the treaty of Hudaybiyyah. He said that the Prophet and his companions were forced to leave their beloved Makkah, and then in the signing of the treaty the Muslims were told by the Quraysh to delete the Names of Allah “ar-Rahman ar-Rahim” from the basmalah since the Quraysh were polytheists who did not believe in these terms, and also delete Rasulallah from the Prophet’s name since they did not believe that he was a messenger of Allah. They were also denied the right to make pilgrimage. Though this seemed like a defeat for the Muslims, in the two years following the signing of the treaty more people became Muslim than in the preceding years of Rasulallah’s mission. He stressed that in taking something away from us Allah is actually always gifting us something, without our knowledge.

Ustadh Usama closed his lecture with a du’a that all of those present be of those who were accepted of the decree of Allah.

Syed Muhammad, the chairperson for the question and answer segment, got the ball rolling for the question and answer segment by saying that in his work with the youth, he often heard youths saying that they had prayed to Allah for what they wanted but their du’as were not answered. Ustadh Usama responded that while there was clear theological proof that du’as seemingly not being answered was actually a sign of a greater good being granted, this answer would seem like a form of justification for why they were not getting what they wanted.

He stressed that the religious understanding of Muslim youth was being “colonised” by other philosophies, and that this was especially dangerous when it concerned the orthodox Islamic understanding of God. It is important to understand, he said, that we don’t make du’a to instruct Allah to do something for us, rather we pray to realise our own weakness and dependency on Allah. He recommended a book entitled Soul Searching: The Religious and Spiritual Lives of American Teenagers by sociologist Christian Smith, which posits that traditional religious understanding among youth was being replaced by what he termed “moralistic therapeutic deism”, where God acted as a cosmic butler and divine therapist who existed simply to meet people’s needs.

A question was asked about the concept of the laws of attraction, based on books such as The Secret, that one can “attract” whatever one desires if you wish for it enough. The questioner wanted to know if such a belief was shirk. Ustadh Usama stated that to believe one can simply wish something into existence, independent of the will of Allah, was tantamount to disbelief and he emphasised that the advice given in self-help books had to be viewed through the lens of traditional Islamic theology and not simply accepted wholesale.

Syed Muhammad gave his own story about acceptance of the will of Allah. He related about how at 25, he was given an ultimatum by his father to either marry his then-girlfriend, who lived in Indonesia, or move out of the house. Despite repeated proposals and countless du’a and prayers day and night, she remained non-committal. Syed Muhammad related that after months of this, he finally broke down crying and made du’a for contentment with whatever Allah chose for him, regardless of whether or not he ended up with the woman. He later discovered that his father himself had travelled to Indonesia to approach her and ask that she marry his son, and she had accepted. Syed Muhammad said that they were still married today, fifteen years later, with three children and he thanked Allah for this blessing. Ustadh Usama jokingly responded that perhaps Syed Muhammad should have given the talk instead of him.

Ustadh Abdul Hakeem was invited to the stage once again to close the evening with mahlul qiyyam, and got everybody in the audience to stand for the recitation of salawat upon the Prophet, peace be upon him. Ustadh Usama then closed the session with a lengthy du’a.

Commenting after the lecture, Muhd Farhan, 32, graphic designer, said that the talk was very enriching. He felt that Ustadh Usama’s advice about not making decisions based on what we thought we needed, but on what Allah wants, was especially relevant to him.

Nurul Syahidah, a teacher, said that it was an important reflection for her that when things do not go according to plan, it was not really Allah rewriting life, but rather Him reintroducing Himself into your life by making you realise your dependence on Him and realise that Allah is the One who is really in control of everything.

This writer felt that it was an important reminder that Islam is not always a feel-good religion, and that true dependence on Allah was accepting that Allah creates the bad along with the good. I appreciated that Ustadh Usama stressed on the need for sound religious understanding among the youth, and that the majlis closed with the traditional mahlul qiyyam. Alhamdulillah for Ustadh Usama Canon’s wealth of knowledge and understanding, and I look forward to learning from him again in the future. 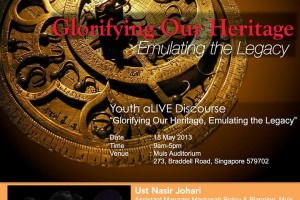 As an introduction in close relevance to the theme of[...]