As part of the 5th Inter-Varsity Networking Session (SMUIBFS, NTUMS, NUSMS and SIM MCMS) in partnership with SimplyIslam, Imam Abdul Rauf presented a lecture entitled “Moving the Mountain” on the 30th of March.

Imam Rauf’s lecture was anchored by his vision of the changing face of Islam and the modern, glocalised (global & local) Muslim in a post 9/11 world. He eloquently expressed how Muslims can and should play a pivotal role in overturning misconceptions about Islam, while being a bridge between the rest of humanity and the Ummah.

His speech, which was largely drawn from his book, “Moving the Mountain”, was premised by the fact that he assumes the role as a “bridge of peace” between the America and Islam, dedicated to improving Muslim-West relations.

This bridge, if examined closely exists between several intersecting vectors between a religion and a nationality – the challenge is then relating two seemingly separate but actually inextricably linked concepts, especially as an American Muslim.

Imam Feisal explained that his new vision of Islam in America is a product of reflexivity on his part. He drew from his own multi-cultural background as an Egyptian who had lived in both Malaysia and the United States. In exploring this multi-cultural facet of his identity, he realized that his need to negotiate these multiple identities while being a practicing Muslim is really a microcosm of how Islam is often expressed across different cultures globally.

He explained that often, cultural practices are subsumed as part of religious rituals over time. An example he cited was Mandi Safar, a Muslim bathing festival unique to the Malayan Penninsula. While this holiday, which is observed during the month of Safar, was believed to commemorate the last time Muhammad (peace be upon him) was able to bathe before his death, Imam Feisal spoke of its roots in the Hindu practice of bathing in the Ganges.

Imam went on to explain that the varying expression and understanding of Islam in different cultures is a phenomenon that is neither new nor novel.

In fact, a historical exploration of the expression of Islam in cosmopolitan Iran and traditional Medina centuries ago would reveal that the understanding of the religion is bound by the cultural and societal demands of a society itself – Iran being cosmopolitan expressed a freer more “liberal” Islam as opposed to more traditional, possibly insular Medina.

As a result, in order to understand Islam, one must first understand how it is expressed within the socio-cultural framework of different countries.

Specific to America, Imam Rauf explicated the multiple parallels between being an American and a Muslim. He did so by exploring similar veins in the two identities.

An especially interesting explanation of these parallels was seen in his detailed discussion of the similarities that exist within the Shari’ah and the American constitution. In doing so, Imam Rauf created a springboard to his larger idea of the Glocal Muslim – or as I would say the ideal “Muslim 2.0” living in an increasingly small, digitized world.

Imam’s vision of the modern day Muslim is one that he hopes would be the globally used expression of Islam.

By promulgating an Islamic identity that is easily in sync with dominant cultures of the West, Imam hopes that Islam would no longer be seen as something alien or far removed from popular culture so to speak.

This modern Muslim image would be a response to the demand that the coming generation Muslims must actively work on. A demand anchored in an expectation of glocalisation, where Islam has to be expressed in a locally identifiable manner while maintaining universality that can be accepted culturally across the globe.

Drawing from America’s visible influence on other societies, Imam suggested that if American Muslims were to adopt a certain image of what a modern day Muslim should be, this image would be one that would readily spread through other cultures.

Though America’s soft power still holds water in this day and age, the vision of a common Muslim identity emanating from America is one I am personally curious to see actualize.

A member of the audience asked how Singaporeans would fit into the matrix of Imam’s new vision for Islam in America.

Imam concluded that not only would the vision of Islam which can be expressed both locally and globally allow Muslims all over the world to feel a greater connection as one Ummah, but it would allow the Ummah to better identify with all of humanity and vice versa.


Farah Bawany
Farah is an undergraduate at the National University of Singapore, studying Communications and New Media. She aspires to be a change-maker, ground-breaker, time-shifting, paradise-seeker.

In today’s armed conflicts, the number of victims among civilians[...]

Event Review: Reflections on the Burdah with Shaykh Ahmad Saad 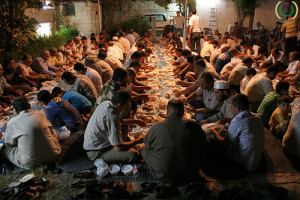