Organised by the NUS Muslim Society, the NTU Muslim Society, APEX and AAM (Aspire Achieve through Mentorship), Adab Towards Working Life was aimed at the graduating classes and alumni of both NUS and NTU as they made the transition from studying to working life.

A seasoned teacher with years of da’wah behind him, Ustaz Zhulkeflee Hj Ismail addressed the audience of brothers and sisters eager to soak up knowledge, peppering his talk with much humour and quoting liberally verses of the Qur’an and examples from the life of the Prophet (SAWS).

An Introduction to Adab

Ustaz Zhulkeflee began his talk by explaining the finer points of adab. He noted that adab had many definitions, the most popular of which was etiquette, and stated that we live in a time of confusion, when Muslims are unaware of the necessity of adab, and believe only knowledge is necessary.

Quoting a hadith of the Prophet, “Verily the Qur’an is Allah’s Banquet on earth, so learn thoroughly, then, from His Banquet”, Ustaz Zhulkeflee noted that the word used for inviting to a banquet was ma’dabah, a derivation of adab. Drawing on Professor Syed Naquib Al-Attas’s Islam and Secularism, he stated that those who were invited to a banquet were “people of refined qualities and upbringing… in speech, conduct and etiquette”.

Linking education and adab, the Ustaz stated that far from being two distinct fields, education is adab. He noted that his own teachers frequently asked after his adab and not his knowledge, as any lapses in knowledge could be attributed to poor memory, but there was no excuse for poor adab.

Ustaz Zhulkeflee drew on the analogy of a plant, saying that just as plants could not be constructed from different parts but had to grow and be cultivated, so too was education an organic process. He stated that how the teacher teaches is education in itself, as was the order and priorities in which one received knowledge, and that all this fell under the scope of adab.

Ustaz Zhulkeflee stated that the objective of an Islamic education is to produce a good person, and in order to do so a murabit is required. The first educators for most people would be their parents, who would then go on to send their children to other teachers once their own knowledge was exhausted. Therefore, Ustaz Zhulkeflee stated, adab towards parents is a matter of paramount importance.

Beginning the topic proper, Ustaz Zhulkeflee referenced Surah Al-Qasas in the Qur’an. He stated that we should not follow the sunnah of Qarun in arrogance and in exulting in our wealth, and that the purpose of work was to strive towards the akhirah, for the good of the life to come.

The Ustaz reminded all those present to check their intentions (niyyah) when going out to work, as this would allow one to spend the entire day as ibadah, reminding everybody that they were responsible first and foremost not to their bosses, but to Allah.

[pullquote_left]Others would judge Islam by our character as Muslims, and that we should represent Islam through our adab.[/pullquote_left]

He related that some people had complained to him about their situations career-wise, saying that non-Muslims were able to succeed in business as they were not subject to the rules that Muslims were, such as restrictions on deception and regulations regarding the halal and the haram.

Ustaz Zhulkeflee answered such doubts by saying that the race we all are running is not a 100 metre dash, but a marathon, and those who succeeded at first would burn out eventually.

Quoting the first verse of Surah Al-Maidah, “Oh you who believe! Fulfill all obligations”, the Ustaz stressed the importance of fulfilling obligations, and being responsible towards all our contracts and obligations, whether as employees, employers or co-workers.

Underscoring the importance of amanah in our dealings, the Ustaz related the story of a shepherd girl during the time of Sayyidina Umar’s caliphate. The girl had been asked by her mother to dilute milk with water before selling it in order to obtain greater profits. The shepherd girl responded that while they might be able to fool the Khalifa and his officers, they could not fool Allah.

Ustaz Zhulkeflee reminded everybody that others would judge Islam by our character as Muslims, and that we should represent Islam through our adab, and thus act as examples to guide others to Islam.

While not dealing with the specifics of working life, the talk was an illuminating introduction to adab and its application in everyday life. While listening to the lecture I reflected on whether I had sufficiently practiced proper adab in my interactions with my superiors and peers at work, and found myself falling far short of the example of the Prophet (SAWS) and his companions.

Being the second talk I had attended in as many months on the topic of adab, I agreed that too many Muslims, myself included, had diminished the importance of adab in our lives and our understanding of the religion. Perhaps we all need to re-evaluate our priorities and more firmly establish adab as one of the cornerstones of our religion, in seeking the rahma of Allah. 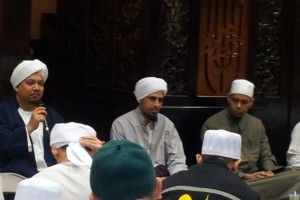 What: Majelis Rasulallah Singapura Where: Masjid Al Abdul Razak Who:[...]