After a couple of days to rest after the hustle and bustle of our wedding, my wife and I were on a flight heading to Barcelona’s El Prat Airport for our Spanish honeymoon. We’d considered various other options before settling on Spain, including Turkey, the Maldives, and others. We finally decided on Spain because we didn’t know how many chances we’d have to go for a holiday in Europe later on in our marriage, plus the Muslim history of Andalusian Spain was something we both wanted the chance to explore.

So armed with a copy of The Story of Islamic Spain by Syed Azizur Rahman and guidebooks by Keyguide and DK, off to Spain we were!

I can’t emphasise enough how wonderful our stay in Granada was. Our itinerary gave us 2 nights in Granada, but we wish we stayed for a few days more. Based on the recommendation of a friend, we stayed at Solar Montes Claros, a bed and breakfast in the Albaicin barrio and the experience was wonderful. The owner, Antonio, even sent a driver (coincidentally also named Antonio) to the airport to pick us up. Solar Montes Claros was on top of a hill, and accessible only by a narrow staircase in a back alley, and getting up to our apartment required climbing up a spiral staircase and another flight of stairs to get there.

I realise I’m not exactly selling the place here, but trust me when I say the climb was worth it. Our room had a beautiful view overlooking the city, and we could see across to the Alhambra from our window, an especially beautiful sight in the nighttime when the Alhambra is lit up against the night sky. We stayed in the room called ‘Persia’ (though I’m not sure what was distinctly Persian about it), which was spacious, and decorated ornately with furniture meant to harken back to Granada’s Andalusian past.

Stepping into the Nasrid Palaces was a breathtaking, awe-inspiring experience. What stuck out the most  was all over the walls was the Arabic phrase “Wa la ghaliba-illallah” (There is no victor but Allah), the motto of the Nasrid rulers. The gardens of the Generalife (pronounced Heh-na- ra-leaf-fay) within the grounds of the Alhambra were another highlight, beautifully maintained and truly cooling to the eyes.

I had intended to drop by the Granada Mosque, which on the map was just a short walk away from where we were staying, for Friday prayers, but the morning’s jaunt crisscrossing the more than 100,000 square metres of the Alhambra frankly took its toll on both of us, leaving us with little strength to do more than retire to our room and lie down. For those interested in seeing more of the mosque, you can see some glimpses of it in this video of Habib Umar bin Hafidz’s visit to Spain.

Halal food was easy enough to find in Granada, with a number of places ranging from your typical Middle-Eastern/Mediterranean fare to pizzas to be found within the vicinity of Plaza Nueva. Plaza Nueva is one of the more prominent locations in Granada and where you’ll find the bus to take to the Alhambra. Within Plaza Nueva itself you’ll also find a fine leather goods store owned by one Munira Medonca, a Muslim lady and transplant from California who specializes in hand crafting leather handbags, notebooks and wall hangings in the traditional Moorish style.

We counted ourselves lucky to have landed a hotel in the historical Old Town of Cordoba, literally just across from the Mezquita, which was our main reason for visiting Cordoba. The Mezquita, originally built on the foundations of a Visigothic church, was converted into a Catholic cathedral in 1236 and remains one to this day and is officially known as the Mosque-Cathedral of Cordoba. Vestibules were created on the sides of what was the main prayer hall dedicated to the various Catholic saints, and placed in the centre of the hall is a typical Catholic church, with pews and an altar. The site’s history as a mosque remains as museum-styled exhibits, including the mihrab which strangely enough does not correctly face the qibla (Mecca is to the south-east of Cordoba, the mihrab faces south).

We had intended to visit Alcázar de los Reyes Cristianos, but it was closed on the day we visited. Wondering where to go next, we decided to take a short walk over to visit the Cordoba Synagogue, only to find that it too had closed just shortly before we arrived!  Of course, one of the benefits of the Old Town of Cordoba is that all the attractions are within walking distance of each other. With little else to do, we decided to stroll over to the Roman Bridge, overlooking the Guadalquivir river.

One of the other places we did manage to visit was the ruins of Madina Azahara, located on the outskirts of the actual city of Cordoba. The coach we took featured a video with a brief preview of the history behind Madina Azahara, and although we didn’t understand most of it (it was in Spanish) we and the other passengers had a laugh at the dramatic, overblown delivery of the voiceover, who kept saying the name of the city in a booming voice “MADINA AZAHARA!”.

The ruins of the city provided an interesting look at the Andalusian history of Spain, as well as a stark contrast to sites such as the Alhambra and the Mezquita, which were preserved over the centuries. The museum in front of the hill on which Madina Azahara stood also provided an excellent overview of the Muslim history of Spain.

Our visit to Madrid was surprisingly uneventful for the most part. The most memorable part of the trip for me was the visit to the National Archaeological Museum of Madrid… which lasted all of five minutes because we didn’t realise that a huge chunk of the museum was being remodeled and only a small selection of their exhibits were on display. Still, what was on display was interesting , covering a history of Spain from pre-history to the Iberian period to present day.

We mostly shopped in Madrid, however others may want to visit the Royal Palace of Madrid or Santiago Bernabéu Stadium, home of Real Madrid.

The websites and tourist guides we had read pointed to La Ramblas as a bohemian haven, with artists and shops full of curios and one-of-a-kind goods. The poet Frederico Garcia Lorca even said that La Ramblas was “the only street in the world which I wish would never end.” The reality is very different. La Ramblas, in my opinion at least, is very much a tourist trap. There are artists and street performers; however the shops are mostly filled with knick-knacks and tourist merchandise like knock-off Real Madrid and Barcelona FC t-shirts.

Still, a short stroll off from La Ramblas is the Middle Eastern/South Asian neighbourhood, with many halal food outlets to be found. While halal food was surprisingly not difficult to come by in Spain, our main difficulty was often the language barrier when communicating to the restaurant staff, as many were not fluent in English and could only speak in Spanish and their native tongues (normally either Arabic or Urdu).

A word of caution that this neighbourhood is also near a red-light district, so it may not be wise to visit after dark.

We did receive a major scare while in the La Rambla district in Barcelona. After more than a week without fried chicken, coming across a cozy little café serving fried chicken, complete with a prominently displayed certificate issued by a Muslim body declaring the meat halal. Assured of the halal status of the food, we happily entered and ordered chicken wings from the friendly Filipino couple who owned the shop. As we waited for our food to be ready, we browsed the menu… and to our horror found that they served bacon and ham. And not of the beef or turkey kinds either. Having already paid for the food, we had no choice but to take it back with us and discretely dispose of it on our way back to the hotel.

Another must visit is La Sagrada Familia, the famous church and UNESCO World Heritage Site designed by famed architect Antoni Gaudí which had been in construction for more than a century. Incorporating a number of architectural and artistic styles, the La Sagrada Familia falls somewhere between the grotesque and visually stunning and the fact that you can see the workman, designers and architects still hard at work on the building makes this tourist site an interesting cross between religious landmark and architectural curiosity.

Spain was a great place for these two newlyweds to visit on their honeymoon, and the Andalusian region in particular is a excellent choice for those with an interest in Islamic history.  A highly recommended destination for all. 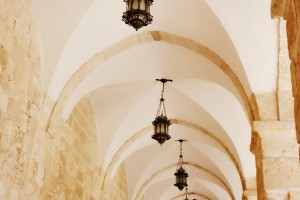 Tips for the Newly Religious

[box_dark]What: Workshop on "The Sublime Characteristics of Prophet Muhammad (S)"[...]