Muzlimbuzz is starting a series called “The 99 Names of Allah” where writers & readers reflect on one Name from the 99 Beautiful Names of Allah and talk about why that particular Name is significant to them, or how they have seen that Name manifest in their lives. If you would like to submit your writing for this series, please send it to ameera@muzlimbuzz.sg.

We’ve read a few stimulating discussions here on Muzlimbuzz centering on what the various names of Allah mean to different people grappling with the challenges of adult life, responsibility and love. Today, I’m sharing with you a lovely conversation I had with my nephew, my attempt at explaining a particular name of Allah and how I saw it anew through the eyes of one of our young ones.

A few years ago, my nephew and I were watching the news together when a report about a horrific plane crash caught his attention.

Him: Are they going to die?

Me: I think they’re already dead..

Him: Mom says that if I do bad things, I will get punished too.

Me: I don’t think these people were being punished. A plane crash is an accident.

Him: Did the accident come from God?

I was stumped for an answer. Even as an adult, I’m constantly battling to reconcile God’s infinite love with his penchant for bringing pain and suffering to those who seem to deserve it the least. Like most people, I’m guilty of watching hurricane footage on the news and sniffing through documentaries about starving refugees, while wondering what unforgivable wrong these victims of ill fate might have possibly committed in their short lives to deserve such horror and tragedy.

I felt ill equipped to discuss this subject with my nephew, but I knew I had to try.

Me: Yes, everything happens because God allows it.

Him: Not the devil?

Me: What do you mean, the devil?

Him: The devil. The devil does bad things to people, right?

Me: God makes bad things happen too. Do you know the 99 names of Allah?

Me: One of them is Ad-Darr; it means The Creator Of Harm.

Him: Then what’s the difference between what the devil does and what God does?

After a long pause, I ventured an example, treading slowly and carefully. It’s so easy to get confused by this name of Allah. Ad-Darr – The creator of the harmful. Why would Allah create harm? Why would He bring forth pain?

Me: Remember how you told me about that bully who was copying your homework?

Him: Yeah, but that was last week. Now he doesn’t take my book anymore.

Me: Who do you think whispers in his ear and tells him to copy your homework?

Me: That’s right. Who lets him walk towards you and take your book?

Me: No, that’s god. The devil made him do it. God allowed it to happen.

Him: God let him bully me?

My nephew was beginning to understand. Alas, Allah’s gift of harm greets us everyday in many forms. To assume that it only makes grand entrances in the form of tidal waves and deadly viruses is to underestimate the all-encompassing nature of Allah. Even my nephew encounters harm in his little world and he’s just a young boy in primary school. Allah is everywhere, in all of conceivable forms.

Him: No, I’ve told him he cannot take it anymore.

Me: That’s great, but how many times did he take your book before that?

Me: Why didn’t you stop him those 4 times?

It took him a while to admit this. Even for a young boy, the prospect of exhibiting weakness arouses shame. What more the rest of us? Too often, we forget and we deny our weaknesses. As such, we must be thankful that Allah presents us with trials to remind us that we are but vulnerable servants of His. For while we are only human and we often forget, Allah is ever gracious and generous with his reminders. Only He can show us how much we lack in strength. And only He can provide that strength when we fall short.

Me: So you’re not scared anymore?

Him: No, I told him, no more. I’ll never be scared again!

Me: Why? What changed?

Me: BRAVER, not more brave!

Me: If that boy never took your book last week, would you be braver now?

We often forget how these tribulations inspire new capacity inside of us, not only for embracing His love, but also for strength, courage and compassion.

Me: Exactly. So now, do you understand?

Him: Allah made me braver?

Me: Correct! So if he bullies any other kids, you must help them.

Him: But what about the people who died?

Me: Dying is not the end remember? Allah decides when we all die. That’s when we have to face His judgment.

Him: Oh yes, this one I know! That’s why we must pray everyday and always be good.

I smiled at my nephew. He was finally beginning to understand this singular name of Allah that once used to perplex even myself. Contented with what we’d both gleaned from our exchange, we turned our attention back to the news report.

There is something magical about having long talks with children. Everything seems to shine so much clearer and the darkest of hours can glimmer with so much hope when you’re making an effort to impart meaning and understanding to a child. Maybe it’s because we’re forced into a fragment of ourselves that strictly deals with simplicity.

We often mistake Allah’s trials as adversity and punishment. We wonder what we did wrong to deserve ill fate when in fact, we were not meant to suffer at all. We were meant to derive strength from His trials and to inspire similar courage in others. My nephew will surely face harsher challengers in life, as he grows older. I can only pray that his spiritual growth is guided by the significance of Ad-Darr and the message of strength and positivity behind it. 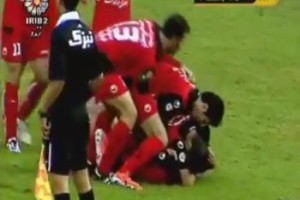 What Muslims can learn from Steve Jobs’ passing 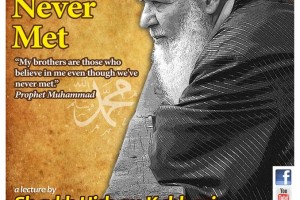 [box_dark]What: Public lecture "Even Though We've Never Met" Who: Shaykh[...]